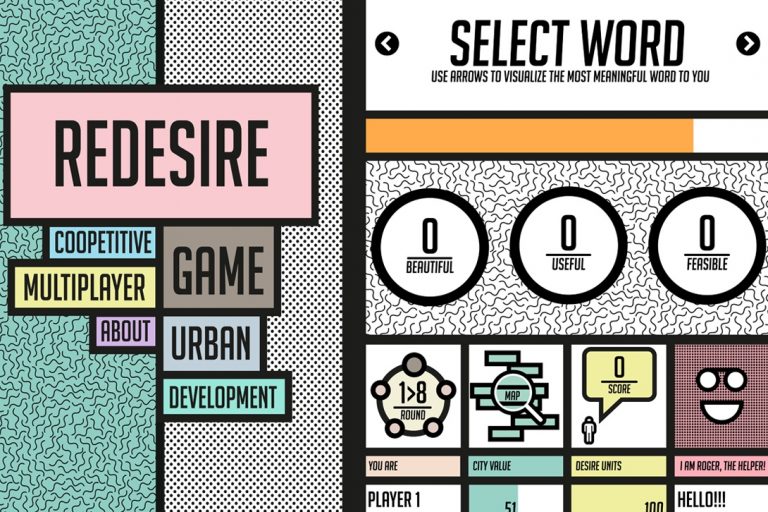 Demystifying the use of space, with Redesire

What factors come into play when designing a city or new urban development?

What factors come into play when designing a city or new urban development? Which parties are involved? Can we use games to illuminate the processes that lead to our city looking, feeling and sounding like it does? We played, laughed, and thought hard, during the urban-planning game Redesire, in the latest edition of Common play with us.

It can be easy to forget, in the heaving bustle of a major city, that every inch of the sprawling cityscape has at one time, been the subject of a tug-of-war between urban planners, property developers, the citizenry, architectural designers, the municipality, and more besides. While it may not always work seamlessly, the city is always broadly a product of the negotiation and compromise between these invested parties. As a citizen however, this negotiation generally hovers, hazy and unseen, beyond the everyday experience of being a participant in the cityscape, and thus can be difficult to comprehend. In their game Redesire, the latest guests of Common play with us seek to demystify and make relatable these processes.

Where, when, who, and what?

The Commons Lab once more took over the Waag on the evening of Thursday February 20th, with the second iteration of Common Play With Us in 2020, and sixth overall. This time saw Socrates Schouten and Mar Escarrabill from Waag host artist Tessa Peters and architect Rolf van Boxmeer, as well as an ensemble of willing game players from across the globe. Peters and Van Boxmeer are the co-founders of Rezone, a developer working at the intersection between play, urban planning and architecture, on this occasion presenting their multiplayer game Redesire, developed in collaboration with We Are Müesli.

Redesire functions by letting participants group together to take on the role of different stakeholders in urban-planning projects, with each stakeholder taking it in turns to select and present an item of development to the other stakeholders, who then express their opinions about it. In the case of this evening, the participants were given the case study of Nietap, a village in Drenthe, around which to centre their developmental ambitions, but the Redesire platform is so effective because it can be utilised for different contexts, allowing for the unique characteristics of different areas to be considered. Peters and van Boxmeer spoke to us about how Redesire has been used in urban planning committees around the country.

And why shouldn’t it? At stake in Redesire are the same issues at stake in urban regeneration and development discussions through (and theoretically beyond) the Netherlands, just channelled through a fun and intuitive interface which allows for the concerns of different stakeholders to be present in a non-confrontational and collaborative way.

Do we prioritise beauty over feasibility, feasibility over usefulness? How do we ensure that the interests of different groups are taken into account? How do we balance the needs of citizens with budgetary concerns? And how do we maintain the character of an area while initiating an urban regeneration? The thread connecting these questions is the ethos of American-Canadian urban space analyst Jane Jacobs, coded into the game to remind players of the importance of the strength, diversity, and depth of community in the life-cycle of urban projects.

The spirit of the commons

In this way, the power of Redesire lies in its commitment to the values of the commons, where fairness and inclusivity are prioritised in the service of something greater than individuals, or the accumulation of wealth for private interests to the detriment of others. Once more, Common Play With Us gave us an insight into the power of games in the navigation of serious societal challenges, and the way that playfulness makes collaboration both more effective and more fun.

Do you want to discover more details of the games that we play-test during the gaming for the commons nights? Be patient! We are co-creating an online repository that will contain useful information to reflect about the commons while playing and having fun.

Would you like to keep exploring the potential of serious (and not that serious) games to delve into the urban commons? Have a look at our agenda and join us at the next Common Play With Us! on March 19th, where we will focus on hacking popular games to make them work for the commons. The doors are open to everyone!