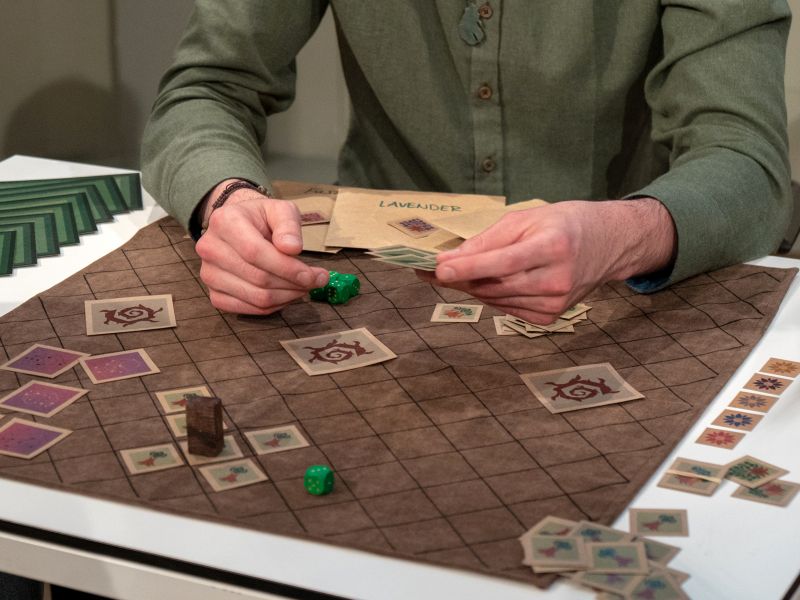 Gaming for the commons

Can games help us achieve a more social and collaborative society?

Commons are shared resources, managed sustainably and for the benefit of society. There are many such commons in our lives: public knowledge, culture, and the fruits of nature can be counted among them. But commercial businesses have turned this abundance into scarcity, and our common resources are under threat of overuse and collapse.

Many people feel something needs to change. Not markets and competition, but sharing and collaboration should be the foundations of society, and inform the way we manage common resources. These are fair thoughts, but how to put them into practice? How can we re-learn the art of commoning? And particularly, how can we do this in a fun and lively way?

In comes serious gaming, the concept where gameplay is used to learn and achieve social objectives. Serious gaming is one of the avenues we are taking in the Chamber of Commons. In April, we started the Common play with us series, of which two editions have taken place thus far.

On the first evening, we tested a recent game called Commonspoly. This is a response to Monopoly, the famous game where you want to accumulate housing wealth. As it happens, Monopoly was conceived in the early 1900s as a means to communicate the dangers of greedy behaviour. Money as we know it, so thought Elizabeth Magie, pits us against one another and brings about massive inequality. In her original design, a second version would point at the merits of taxing, and sharing, wealth. But the ‘capitalist’ Monopoly got great sway because, well, people like competition. Owning expensive real estate and collecting rent is a fun objective.

Good gameplay is essential to any game. By today’s standards, Monopoly’s gameplay is not superb, because it is based on rather simple mechanics. Moreover, a winner often emerges early in the game, while finishing the game can take ages. 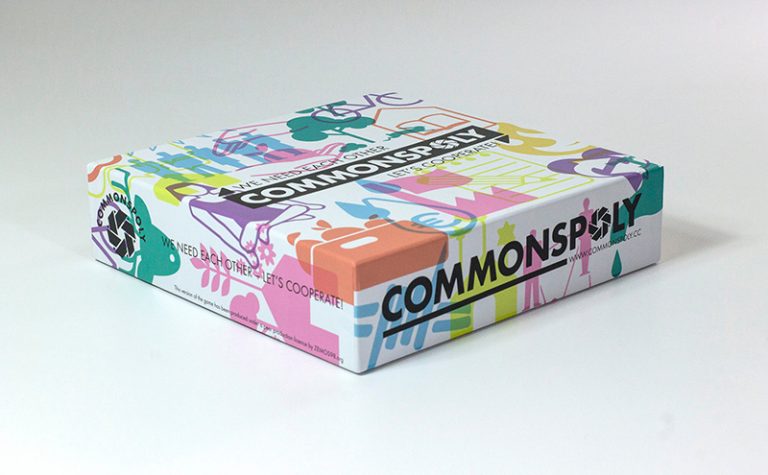 Fast forward 115 years and we have Commonspoly. This recent game was designed in Spain by a collective of designers and game enthusiasts. The makers of Commonspoly have gone to great lengths to conceive commons-based rules and objectives instead of capitalist ones. In the game all kinds of resources must be liberated from the hands of private actors. Instead of trying to accumulate wealth, players cooperate to turn private resources into public ones, and then into ‘commons’ ones. They do so by hopping around the board as one does in Monopoly, but they ‘buy’ the squares from private owners for the common good, and not for private gain.

The gameplay of Commonspoly is more sophisticated and complex than Monopoly. But herein also lies the catch. While the gameplay is complex, the objective is very simple, and quite a bit out of sync at that. Players commented that they found little excitement in pursuing the game’s stated objective. They also found game development insatisfactory, as well as that of their own ‘character’. The gameplay is also largely determined by chance (the rolling of dice) instead of by strategy, which compromises the ‘commons’ narrative that could have been in it.

But… fork that! Commonspoly is published open source and well documented. The developers heartily welcome you to build on it, or branch off a version with your own rules and elements. You can visit their website and go right ahead.

A Monopoly for trees?

On the first night, we were joined by the good company of SubCultures, an alternative game store in Utrecht. On the second, we were happy to welcome Jesse Kroon as our special guest. Jesse is working on a game of his own: Arbor, a game that lets you grow a forest. Bigger forests win!

Jesse started the evening by sharing his insights in game development. Game whizzes know that games have elements and actions. And there are many more game design concepts that go around. But for Jesse, there are two things that comprise the essence of any game: the core mechanic, and what he calls the north star. The core mechanic is the main thing that should be achieved: ‘what is the player doing?’ In Commonspoly, that would be the ‘flipping’ of resources. The north star, then, is the big story: ‘what is the game about?’ In Commonspoly’s case, the necessity for us to reconceive resources as commons.

But let’s forget Commonspoly for now and look at Jesse’s game, Arbor. When play time came, eight people gathered around for an explanation of the rules. By pitting two against two, yet giving each their own forest to create, a cooperative element was introduced to the game. Like Commonspoly, Arbor is a complicated game with numerous gameplay elements. The core mechanic involves garnering ‘Glory’; points awarded for outwitting one’s opponents and growing the biggest, healthiest forest. The game is big on nature and rich in lore: players all choose from a range of ‘druid’ characters with suitably mythical names, forests are grown on a felt playing field by tiling tree cards adjacent to each other in diamond patterns, flowers function like spells that hinder your opponent, and game elements like fertility and tranquility further the feeling that you’re deep in some magical place of wisdom now, yet still subject to the rules of nature. The experience was deepened by the soothing audioscapes that Jesse likes to listen to when playing Arbor.

The first die was thrown and the game started out slowly, deliberately, just like any forest would. At the same time, Jesse raced through words to explain the game’s more intricate rules, and to expand on its mythology. As things started to click and progress started to be made, players were visibly swept up by the game’s combined elements. Before they knew it (and unfortunately, before the game was finished) the night was over.

Common play with us will continue to broaden its scope and deepen its knowledge. Already, our participants were able to opt for playing other games such as Pandemic and Magic Maze. These are commercial games, but the gameplay is collaborative, and great fun. By playing these concurrently, we could compare gameplay and mechanics, and learn while playing.

So far, the evenings were a great success. E-mail addresses were exchanged so that a date could be set for the next round of Arbor or Commonspoly.

And you are warmly invited for the next edition, too. Are you developing a game that fits the theme of this series? Or would you like to collaborate with us? Or do you just want to have a fun evening playing and talking about (developing) games? The doors are open for anyone—join us!