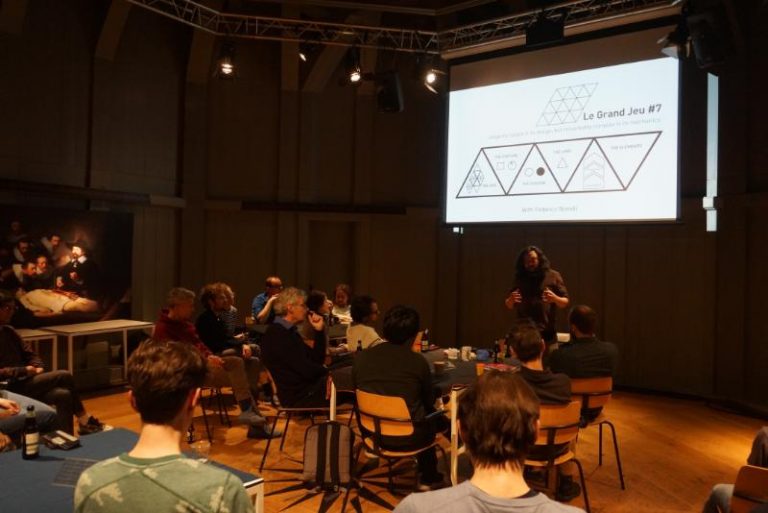 Can we have in-depth discussions about our political and economic system by rolling the dice?

Can we have in-depth discussions about our political and economic system by rolling the dice? Can we reclaim the city while playing? Is it possible to shape our utopias using colourful play-dough? In the fifth edition of Common play with us, we put the exciting game Le Grand Jeu to the test.

Public space – why does it matter?

Recall the smell of a fresh stroopwafel made in the street, the park where you played with your friends, the food market that served as an agora for the neighbours. It is clear that public space provides shape, life, smells and colour to our collective memories.  ​​​​​Nowadays, the public essence of urban space is being wiped away as a consequence of mass tourism, consumption and gentrification, amongst other factors. In addition, citizens barely get asked how they visualise the future of their neighbourhoods. Public space is simply not very much on top of mind for most people, however profound its functions.

Poetry might help. In the poem ‘Joves en la nit‘ (Young in the night), the poet Joan Margarit ponders the public space transformations that took place in Barcelona. He points out that he does not feel nostalgic of his youth in Barcelona but rather of the urban landscape changes that transformed the city so fast. Re-reading his poem I ask myself how can we reclaim the city and put the power of transforming the public space in the citizens’ hands.

Participatory games to reclaim the city

Maybe even more than poetry, gaming could contribute to the appreciation of, and deliberation on, public space. The journalist Cristina Sáez finds that a wide range of playful interventions is happening in many cities to reclaim the city while playing. They are carried out with different specific purposes, including taking ownership of the public space, promoting civic behaviour or just reminding adults that play and having fun is not just for kids. The researcher and urban designer Delaram Ashtari and the Assistant Professor in New Media Studies of the Utrecht University Michiel de Lange delved into the mechanics, dynamics and aesthetics of games. During their research, they highlighted many relations between some aspects of playing and citizenship. Games can expand expression and communication skills, increase civic knowledge, build lateral trust and collective reflection, promote creativity or provide new spaces for practicing citizenship. They also defend that some mechanics, dynamics or aesthetics of games can be a tool to strength citizen engagement and provide a new space to take action. They propose the notion of ‘playful citizenship’ – a term already introduced by Rene Glas – as a new civic engagement style in urban planning. The Dutch game Redesire could be an example of this type of citizen participation. Redesire will be explored in the sixth edition of Common play with us.

In the fifth edition of our monthly game night for the commons, we play-tested and analysed Le Grand Jeu, which gave the opportunity to build and transform systems and cities with our hands. As Michiel de Lange put forward in his talk at Pakhuis de Zwijger, games don’t offer solutions to city problems so much as create a context that let people come up with ideas to address systemic problems. Le Grand Jeu is a good example of this. This game was co-designed in 2016 by an expert group of artists, engineers, designers and activists lead by Federico Bonelli. The aim of the game is to design a tool which allows us to describe the future of our society, and to craft and discuss it in a positive way. Playing Le Grand Jeu, people can assess and narrate new scenarios for public spaces. Thus, the game can engage players into scoping an imaginary city and promote multi-stakeholder modes of city making. I would like to reflect about four ideas that came to my mind while playing the game.

Le Grand Jeu creates an open agora in which the critical, creative and caring modes of thinking, described by the philosopher Matthew Lipman, emerge. Lipman argued that democracy needs reflective and reasonable citizens who participate actively in the decisions that affect the community, requiring different ways of thinking. Critical thinking is linked to logic, observation and analysis; creative thinking fosters imagination and the ability to think of new possibilities to solve problems; and caring thinking is driven by the ethics of care. The latter is indispensable within the community as it brings people to the centre and promotes empathy.

How does this apply to Le Grand Jeu? Players must analyse the scenario created to choose their game actions. In addition, the game lets people create and invent new elements to build cities and also empathize with the situation of their co-players. In this context, we experienced a safe and positive way to discuss some narratives about the future of our society by transferring this scenario to the real world and reflecting on the impact of certain political systems.

The gameplay is really ‘done together’. While playing this immersive game, players experience what transparency means as all the decisions of other participants are visible. Players can’t hide their actions and the impact of them. This environment lets emerge a wide range of stories and scenarios that can be discussed during the game and analysed calmly after the game.

The game is composed of tangible pieces that create a common language among different players. In this context, players can change the world with the dice and define possible narratives that would shape the future.

This common language – based on play-dough, dice, plastic triangles and markers – lets information flow. Ideas and points of view can be shared. Players can learn from each other while living in a co-designed fictitious scenario for a moment. In summary, concepts arise from doing and interacting.

Le Grand Jeu creates a hybrid city in which imagination and the real world overlap. Players can invent rules and laws, but the game master also manages the game dynamics, so that reality does not get out of sight. Can this game-play be translated into concrete social actions that players could take in the real world? At the moment, this game has been used mainly for discussion and reflection. However, concepts like DIY urbanism, tactical urbanism, commons-based urbanism or hackable city-making open a door to transfer the dynamics of the game to a real collaborative transformation of the city.

How did players experience the game?

Players agreed that this game let them explore alternative worlds while encouraging a continuous exchange of information, ideas and experiences between participants. In relation to the urban commons, players felt that the game made them feel a sense of community and let them reach a consensus while having fun. We also discussed the best contexts to play the game. Players highlighted that the game can be useful during a community participation activity and also during a multi-stakeholder co-creation process.

Do you want to discover more details of the games that we play-test during the gaming for the commons nights? Be patient! We are co-creating an online repository that will contain useful information to reflect about the commons while playing and having fun.

Would you like to keep exploring the potential of serious (and not that serious) games to delve into the urban commons? Have a look at our agenda and join us at the next Common play with us event. See you in this adventure!